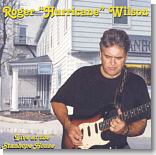 Live at the Stanhope House (Blue Storm Records) from Roger “Hurricane” Wilson, is a CD from a very accomplished guitarist playing live at the Stanhope House in New Jersey. The album features three original Roger Wilson tracks mixed in with eight very good cover versions, and there really isn’t a bad track amongst them. Obviously some are stronger than others, but this trio of Roger Wilson, with Crazy Eddie Stilles on bass and David Junior Moore on drums, does credit to the originals in every case. The album opens with a great version of Roy Buchanan’s “Short Fuse,” an instrumental introduction to what this band is good at, and a good showcase for Roger Wilson’s guitar playing. Right slap bang in the middle of the album is an incredible 15 minute demonstration of how Roger Wilson handles slide guitar, based around the old standard “Dust My Broom,” but veering off on several different tangents. You only have to listen to this track to realize that this man knows how to handle himself with a blues guitar. Rather unusually, Wilson includes a version of Elvis Presley’s “Little Sister” (written by Doc Pomus). It works, but it’s probably the only (relatively) weak spot on the CD. From the three Roger Wilson originals, “Back Porch Blues” really stands out; this is instrumental blues as it should be. Tempo and mood changes and good playing by the band, and almost eight minutes of great blues. Out of the cover versions, I think it’s a dead heat for me between “Short Fuse” and Buddy Guy’s “Leave My Girl Alone.” This is a CD worth having in any collection, by an artist who deserves a lot more recognition.