Bruce Springsteen is touring in the spring of 2014. While I don’t attend many big concerts anymore, I’ll be in the audience for Bruce. Having spent my childhood on the Jersey Shore, I can relate to the songs, and I know the places he’s talking about. I’ll be in the audience  for his Atlanta show on 4/27/14. The following is  a sneak peak at Chapter 9 of my book, which is currently a continual work in progress. 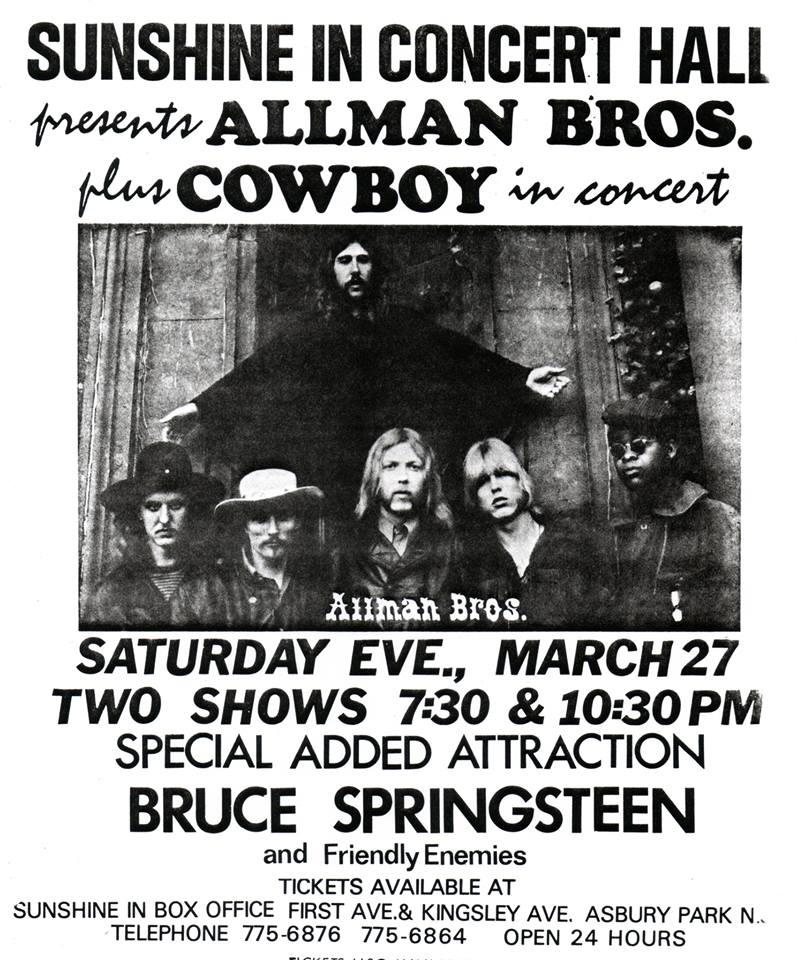 Allman Bros first time in NJ on the way back south from having just recorded the Live At Fillmore East album in March of 1971. Springsteen threw a band together the day before to open the gig.

The first time I saw Bruce Springsteen was in March of 1971 in Asbury Park, NJ. I was home from boarding school in Atlanta for vacation and just happened to catch the first ever Allman Brothers Band show in NJ. My Dad and I were walking around a local college that I was thinking about attending, and would do so from 1972 until 1973. When I happened upon one of those gazebo type bulletin boards, I grabbed this familiar looking flier that had the a picture of the Allman Brothers Band on it, advertising a Saturday night show a couple of days later. The name at the bottom of the flier indicating the opening act was Bruce Springsteen. When I called the venue to reserve tickets, the guy answering the phone said I would have no problem getting tickets, because no one knew who they were. I told him I knew who they were, and would be there to see them, since I was already a fan and had already witnessed sold out shows in Atlanta. He finally gave in and reserved 2 tickets for me when I wouldn’t take no for an answer.
Later I found out they were on the way back to Atlanta a week after they had just cut the legendary Live at the Fillmore East album.
I remember observing this long-haired guy moving guitars around and basically overseeing the set-up of the whole stage. When they finally were in position to play, one of the band members pulled a rope, causing a wooden sign over the stage to flip down on hinges. The sign read, “Dr. Zoom and The Sonic Boom”. There was this other funny hippie guy in a pin stripe suit and a string tie playing harmonica. I found out later that this was Southside Johnny. I also recognized the bass player as being a guy that I was in Boy Scouts with as a kid. That was only about 5 years previously because I was still just a kid at 17 on this night. The guy playing guitar was Bruce Springsteen. He announced that they had just thrown this show together to open for the Allmans.  The thing I noticed about this Springsteen guy was that he was playing a gold top Gibson Les Paul, and he was really wailing. This long-haired guy was really serious about what he was doing. I couldn’t get the show out of my mind. Later, when the Brothers came out, that’s who I was here to see.

When I flew back to Atlanta the next day, then, and forever after that, I couldn’t get this guitar player out of my mind. He seemed like the epitome of a local guy set on playing music his way, and I liked that. That’s what the Allmans were all about too. Real music is what I loved from the start, so my musical obsession was really taking root, if it hadn’t already.
After heading back to New Jersey for the summer, I was really bearing down on my guitar playing. I was buying concert tickets for shows every week. I went to see shows by Jethro Tull, Yes, Black Sabbath, Mountain, and Alice Cooper, just to name a few. I remember paying 5 bucks for a ticket to a show by Bruce Springsteen at the Sunshine In Music Hall, the same place I had seen him open for the ABB. By this time, he had put his own band together. He had Southside Johnny in the band, and had some black chick backup singers, and really pulled out the stops. Bruce played guitar and sang the whole night. He would stop the band and play these occasional smoking free form solos between each song. He was the only guitar player. To me, this guy was great, but by being local, he was also approachable. The crowd was a local cult following… people that knew who Bruce was. Friends and local fans. I was now one of the hip ones there that was in on this secret. Even at 17, I knew I was witnessing history in the making. He had this song that had the words “roll over, roll over, roll over,” in the chorus with the chords E, B, A, B accompanying them. I knew that was one of his own songs, I remembered from the show 3 months earlier, but after hearing again this night, I never heard it again. 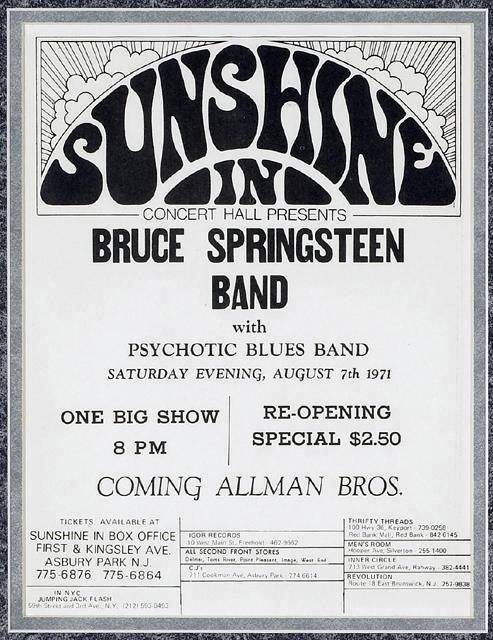 Bruce’s solo show in the summer of 1971 at the Sunshine In in Asbury park, NJ. The flier promoted a second upcoming Allman Brothers Show, but it never happened due to the death of Duane Alllman later that fall.

Later that summer I turned 18, and I was heading into my senior year. I returned to Atlanta at the end of August for my final year in high school. By this time, I was so eaten up by the music bug, it was all I could think about. Somehow, I made good grades, and was the drum major of the school band, along with a few other civic activities. As I was getting ready to bear down on my guitar, Duane Allman was killed in late October, 1971, and the impact on me was similar to the JFK assassination in 1963 when I was 10. When I graduated in May of 1972, I then returned to New Jersey. I got a job at a performing arts center working backstage, which got me close to the stage, but not quite where I wanted to be. I went to a James Gang show that year. Bruce’s band, Steel Mill was the opener on that show. Another time, there was a free outdoor show at the college I was planning to attend, and I remember seeing both Springsteen and Southside Johnny off to the side of the stage. It just seemed like if there was music going on somewhere in the county, Bruce Springsteen was involved in it. Later that winter, I heard a song on WNEW-FM in New York playing a song I had never heard. It was from Bruce’s new album, “Greetings From Asbury Park.” It didn’t sound anything like the guitar driven stuff I had heard this crazy hippie guitar player do before. It was loaded with crazy rhyming lyrics, and it seemed like the music was overshadowed. Not that it wasn’t good, but it was just different from what I was accustomed to by Bruce Springsteen. He was being compared to Bob Dylan, and other folk artists. I couldn’t figure out where these analogies were coming from. It was bizarre.

Around that same time, the band I was with grabbed a gig at a little joint in Asbury Park called “The Student Prince”. I remember standing on the stage in view of the schedule and reading that Bruce would be in the next week. I thought that was pretty cool. As it turns out, Bruce had the house gig there for a good clip. That next spring, I saw Bruce playing at a concert that was taking place at the college I was attending, and he was also playing for a junior- senior prom at a private school just up the road that I had been calling on for a gig. I left New Jersey in June of 73 to head back south to Atlanta. At that time, the music scene was strong, and it was then slated to become a “music mecca” according to the press. With all that transpired musically from Atlanta, I wanted to be immersed whatever it was that was causing all of this great talent to blossom from the South. A position with the radio station at Georgia State University enabled me to be around the music scene, as well as obtain radio experience which would benefit me later in my broadcasting career. One day, while I was working in the production room, I came across a copy of Bruce’s “Greetings From Asbury Park” album stashed in among a stack of practically discarded production records. I asked everyone around if they had heard of Bruce Springsteen, and everybody shook their heads “no”. After also landing a far-fetched opportunity of teaching guitar lessons, I eventually opened my own teaching studio. Sometime in 1974, I remember Bruce performing at a club called Richard’s. Unfortunately, I found out about the show after the fact, by seeing Bruce’s name on the marquis a day late.

Sometime in mid-1975, Bruce had just released “Born to Run”. I managed to get a local paper to give me permission to interview Bruce and to catch the show. The music editor of the paper caught the first night’s show, and called me the next day. He said he had never been moved by a show as much as he had been just knocked out by Springsteen. He said my name was at the door and that I should really enjoy the show, but to try to get some good material, including some time to talk to Bruce. When I showed up at Atlanta’s Electric Ballroom, I was greeted very rudely by Bruce’s road manager at the dressing room door. After I explained to him why I was there, he just maintained his dirty look, but he reluctantly let me head down the stairs to Bruce’s dressing room.

When I got there, Bruce was sitting down tuning a Fender electric twelve-string guitar. He was pretty focused on concentrating on that, so I knew I may not have his full attention. I mentioned to him that I wanted to talk to him for a printed piece, but he just said that he had to continue tuning. When I did tell him I was a Jersey boy and mentioned some familiar places, he was very cordial. I mentioned the Student Prince, a little Asbury Park club I had played once, and then he played a week later. He was very soft spoken and polite, but I could tell he was preoccupied with this show. When I figured I got all I was going to get, I politely said goodbye, wished him good luck, and went back upstairs to watch the show. Even though I wasn’t there long, I realized on the way back up the stairs from the dressing room that I had just gone one on one with “The Boss”. There were no photos or witnesses, but I knew this would be something I would remember for a long time. I knew this guy would be big, but I don’t think I really thought how big he would become. Soon after that, he was on the covers of Time & Newsweek, being touted as the “Future of Rock & Roll”. That future has come to pass. It’s always amazing to see the media attention Bruce attracts anytime he announces a tour. His longevity is truly all about staying focused on the music. He’s always reinventing himself by writing and keeping everything fresh. While other rock & roll artists either fall by the wayside,  continue in their comfort zone by playing only their familiar hits at county fairs, or maybe appearing with  one original member doing stints at clubs, Bruce touches on the old and new during his 3 hours onstage. While I don’t go to many large concerts anymore, I’ll go see Bruce.