A number of years back, I got to be  personal friends with Andy Rooney, the 60 Minutes icon.  The second anniversary of his passing is  on November 4, 2013. 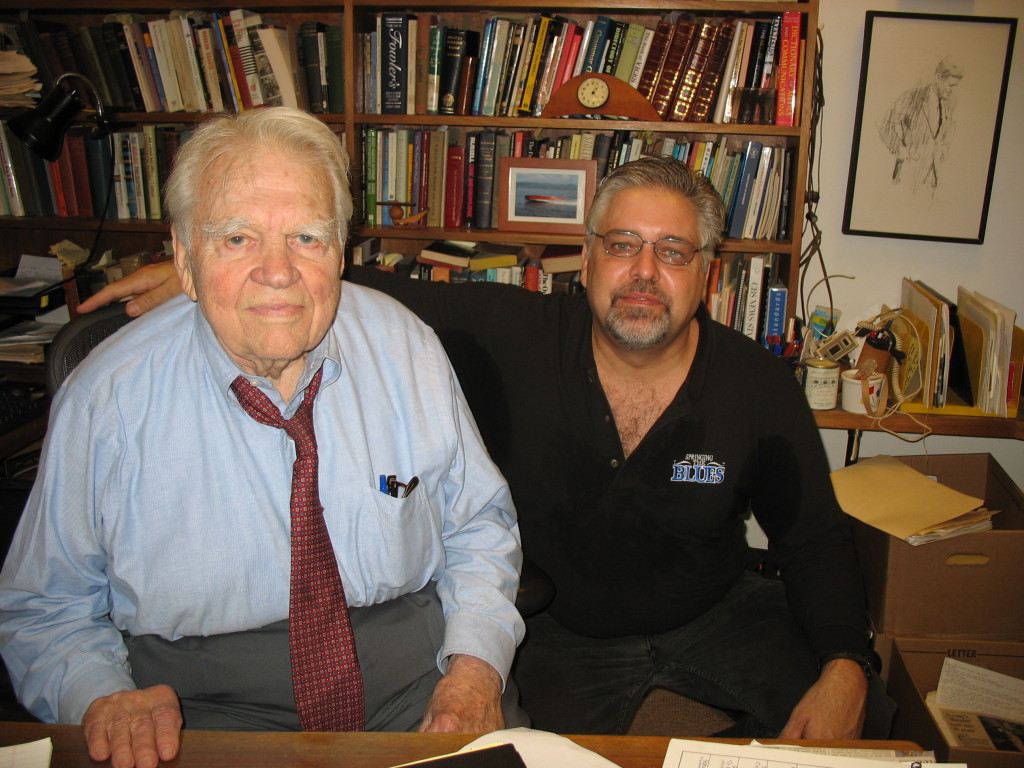 After reading one of Andy’s books back to 2006, I mailed the book to him, requesting his autograph. He graciously sent the book back personally signed to me.A number of months later,I completed another book while on a tour along the Wyoming prairie. Since I knew that I would be in NYC a few months later visiting les Paul at the Iridium, I wrote a letter to Andy telling him I would be in town, Of course, I include the book in the package and requested an additional autograph. Not too ling after, a package arrived at my home with the signed book, and a personal letter to me from Andy. He wrote the letter on his Royal typewriter, and actually hand corrected a letter or two in pencil. Since I had handwritten my note to him, he seemed impressed by that. Andy humorously mentioned that he still knew how to write actual letters, since most of what we do these days is on a computer or word processor. He mentioned his lack of knowledge of music, but didthat he had been friends with a well known NY musician now passed on. Also included in his note was his phone number, and an invitation to come visit him when I return  to New York. I knew I wouldn’t fail to do this.

Weeks later when I arrived in the Northeast, I called Andy, letting him know I would be at the Iridium with Les Paul on the following Monday night. We set up an appointment on Tuesday to meet in his office at CBS. I rode the bus into NYC from a suburb where I was staying, and arrived at 11 a.m. When I got to his office, Andy was at his desk writing, and according to him in his books is where he is most happy.We sat and talked about various subjects, mainly ones I was familiar with, since i was well read regarding Andy. After about an hour, Andy’s producer, Keith, took the photo posted herein, and we said goodbye. During the next year, I would read several of Andy’s books, and send each of them in requesting the usual autograph.

The next year, 2007, I made another visit to see Andy. We talked about various subjects. I also got to say hello to his producer, Keith, and to mee his secretary, Susie. He mentioned that he had just been to an engagement where Tom Brokaw was speaking. He was a big fan of Brokaw and sang very high praises of him, Coincidentally, I just happened to bring a copy of Andy’s book with me, My War, which is the story of his first job as a journalist in WWII.He wrote for the military publication, Stars & Stripes, and would fly with the pilots on the bombing missions over Normandy.Realizing that Tom Brokaw had written the foreward  in My War, I brought this to Andy’s attention. He looked at the commentary in the book, and was totally unaware, or at least he had forgotten, that Tom Brokaw had written the introductory piece of his book. He laughed about it and we moved on.

Knowing that Andy lived in Connecticut, I asked him how  hewas dealing with the commute, said that he had a small apartment in the city where he would stay while working. He once again invited me back  to visit the next year, if he was still there. Before leaving, he gave me a copy of his latest book that I would plan on reading once I got on the bus. When I settled back in my seat, the first thing I noticed was the dedication of the book to his wife, Margie, who had passed away 4 years earlier. I felt bad reading this, because I had read of Margie in many if Andy’s books. His writing there mentioned that he wouldn’t be writing about his wife much anymore, simply because it was too painful to do so. During our discussions, I never heard Andy mention Margie, and now I understand why. I basically knew my second visit would be my last one, just because of touring schedules and such. We did keep in touch off and on, and when I wrote and recorded the song, The Ballad of Andy Rooney , I sent him a copy. I never really found out if he liked it or not, but, knowing Andy, I’m sure he appreciated the thought. I hope so anyway.

When I knew, or at least I thought that Andy might step down soon, I wrote him a letter thanking him for the opportunity to have visited, and to have become friends. In watching Andy’s farewll piece on 60 Minutes, I was really hoping that he would be able to have an actual period of relaxation with time to himself. It was classic Andy that night in that he asked if,  and when folks would see him in public, to just let hom eat his dinner. Andy passed away not too long after during a minor surgical procedure at age 92. Seems it was true when Andy said, “I am most happy when I’m writing”. While, as my song states, “We could set our watch by him on Sunday night”, as he would close out the program 60 Minutes. The best thing the 60 Minutes brass could do was to not replace his segment with anything of anybody. That is the ultimate tribute!

Here is a link to the song I wrote about him released on my 2010 Bluestorm Records CD, The Rainbow Up Ahead. Click Here To Listen: The Ballad of Andy Rooney