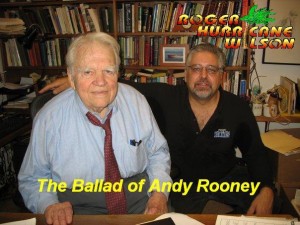 I had the distinct pleasure of getting to know Andy Rooney personally after writing him a letter in 2008, after reading one of his books. He graciously signed the book and mailed it back to me. After writing him a second time when completing another one of his books, he wrote back to me on his Royal typewriter and invited me to visit him at his office at CBS in New York during my next stop there. For 2 consecutive years, I made visits to CBS News, and I got to know Andy on a personal level. He wasn’t the type of person to interact often with fans, but he took a liking to my handwritten letter and the fact that I would be coming to NYC to sit in with Les Paul and his trio at their Monday night gig at The Iridium. Andy signed additional books for me as I would finish them, and we would stay in touch. Later, I wrote the song, BALLAD OF ANDY ROONEY, and I sent it to him. I’m hoping he got a kick out of it, but he never did say. Andy was always happiest when he was writing, and he vowed that he would never retire. It is that kind of passion in life that I believe keeps folks to want to keep on living. He had a long and successful career beginning as a journalist in the U.S Army while flying with and reporting on the bombing missions over Normandy in WWII. He later wrote for famous guys like Arthur Godfrey and Harry Reasoner to name just a couple. His commentaries on 60 Minutes on Sunday nights were legendary, whether or not you agreed or disagreed with him. He didn’t care. Unfortunately, we lost him on November 4, 2011 at the age of 92. Andy Rooney was a great inspiration to me. Ironically, the anniversary of Andy’s death falls on election day this year.  Of course, he had something to say about that before he left. http://www.cbsnews.com/news/andy-rooney-dont-vote/

Order Download of THE BALLAD OF ANDY ROONEY Here

Be sure to look for the chapter telling the whole Andy story in my upcoming book, HURRICANE, to be released in early 2016.
Like The Upcoming Book Facebook Page Here