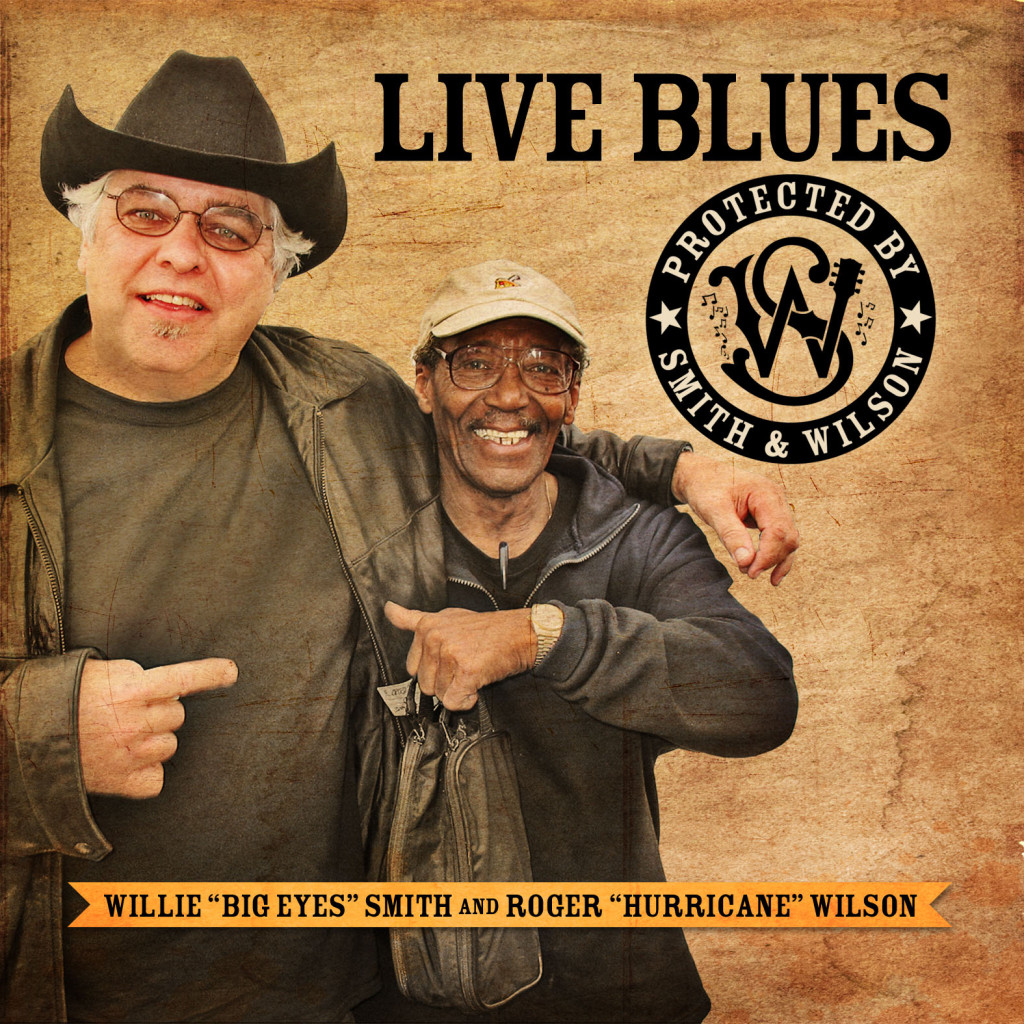 Celebrate the 4th anniversary of when this CD was recorded back on December 11, 2009 at the Whitaker Center in Harrisburg, PA

To Order an Autographed CD, send $15.00 via Paypal to roger@hurricanewilson.com

To Order a Download Card, send $10.00 via Paypal to roger@hurricanewilson.com

Losing Willie “Big Eyes” Smith in 2011 makes this CD a bittersweet tribute to where he had gone with his Blues near the end of his life. He was already considered to be the ultimate Blues drummer since his decades in Muddy Waters’ band. Recently he had stepped out front, singing and playing harp. This CD shows he was at the peak of his powers. His singing and harp playing are the pure sound of Willie’s Blues, delivered in the clear setting of this duo.  Roger “Hurricane” Wilson is a Blues troubadour who drives around the countryto play solo, with a band, or in this special collaboration with Willie. I have played guitar many times with only Willie and myself and wondered how Roger and Willie would go together. Listening, I’m not surprised that these two road warriors inspire each other and thrill their audience. They support each other beautifully. Roger brings his own style and experience to Willie’s songs, and Willie embellishes Roger’s songs with his harp.  Separately and together, Willie and Roger have traveled a lot of miles. On this recording, they ain’t burnin’ no oil and are truly steady rollin’. — Bob Margolin, January 2012

PROGRAM FROM THIS RECORDED SHOW AT THE WHITAKER CENTER IN HARRISBURG, PA.

WILLIE “BIG EYES” SMITH
At age 17, Willie “Big Eyes” Smith was hooked on the blues after hearing the inspirational Muddy Waters. His traditional shuffle style has been regarded as the heart and soul of the Chicago blues sound. laying the beat behind many blues classics. As a harmonica player, Smith formed his own trio and toured the
Chicago area, eventually switching to the drums, which led to an invitation to join his idol, Muddy Waters. Eighteen years later, Smith broke away and co-founded The Legendary Blues Band – recording four critically acclaimed albums and eaming several Grammy Awards. Nominations. Born In Arkansas (2008) is Smith’s latest release.

ROGER “HURRICANE” WILSON
Four decades ago, Roger “Hurricane” Wilson taught hundreds of people to play guitar. In
1978, after opening his guitar studio in Atlanta, Wilson formed the Roger Wilson Band, opening
for Stillwater, Albert Collins, and38 Special. As a new step In his music career, Wilson formed his own record label, Bluestorm Records In 1997. Wilson continues to perform witha band and as a solo artist to promote his most recent album, Exodus (2008). He has since released several albums featuring his classical folk recordings accompanied with acoustics. SPOTLIGHT 13 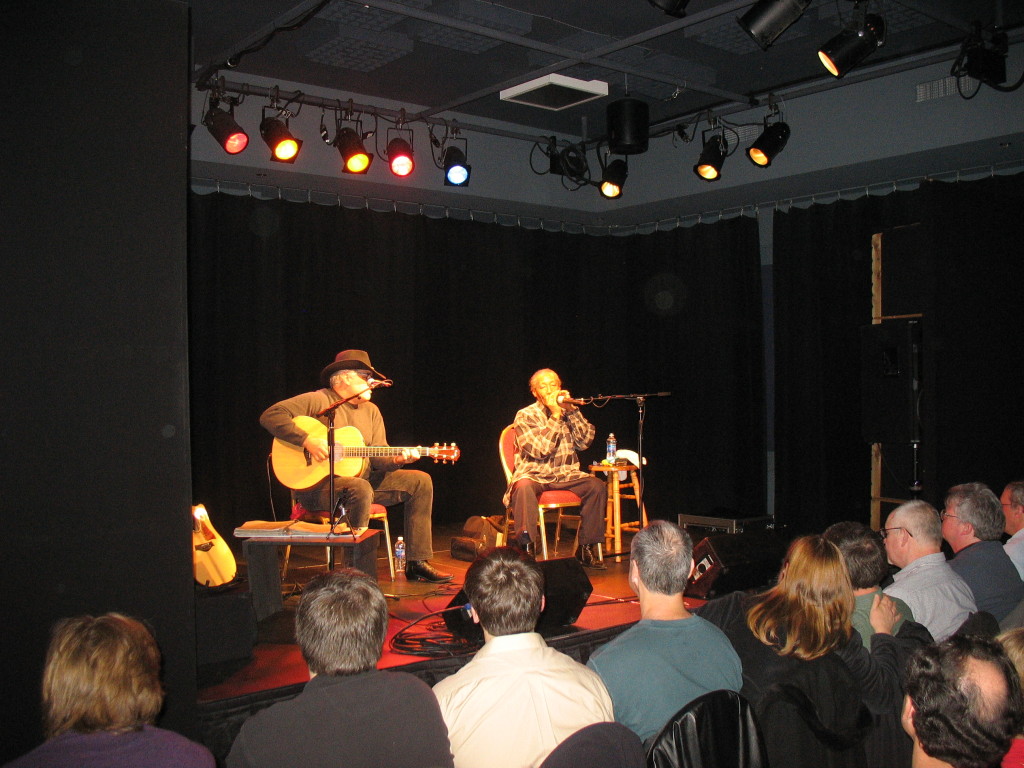 Bluestorm Records Presents The New CD by Willie “Big Eyes” Smith & Roger “Hurricane” Wilson- Live Blues Protected by Smith & Wilson
This is a special CD in honor of Grammy winner, and longtime Muddy Waters’ band member, the late Willie “Big Eyes” Smith, along with longtime touring Georgia musician, Roger “Hurricane” Wilson. It was recorded during one of the 4 tours that the pair did as a duo throughout the U.S. in the South, the Northeast, and the Midwest, in 2008 through 2010. This one night was truly a musically magical one at a sold out theater show in Harrisburg, PA. You can feel the positive energy from the stage and from the crowd. On this night, along with Wilson on guitar and vocals, he was captured performing traditional Blues in a wonderful intimate setting. This release is in addition to the sessions recorded around the same time at the Sirius XM Radio studios in Washington, DC that are still airing on B.B. King’s Bluesville.
While Willie “Big Eyes” Smith was mainly known as the drummer for Muddy Waters for many years, and with his traditional shuffle style regarded as the heart and soul for the Chicago Blues sound, he was also a very accomplished Blues harmonica player, songwriter, vocalist, and bandleader. Most recently, he received a Grammy in 2010 for his work with Pinetop Perkins for best Traditional Blues CD for Joined At The Hip on Telarc Records.
Roger “Hurricane” Wilson began playing guitar in 1963 at the age of 9. He has been playing professionally since 1973 as a well-known guitar instructor, itinerant touring artist, recording artist, record label owner, music publisher, songwriter, as well as bandleader. With over a million miles traveled, he has honed his skills on electric and acoustic guitar, and really blends his acoustic side marvelously with Willie in this live recording. Longtime Muddy Waters guitarist Bob Margolin says,
“Roger blends his style wonderfully in preserving the concept of traditional Blues and complimenting Willie in this wonderful live CD”. The legendary Les Paul once said about Roger, “this guy plays some great Blues”.
An advance track from this CD has already appeared on the March/April, 2012 Blues Revue Magazine CD Sampler. Interest in this project has been building rapidly. Requests from Blues radio D.J.’s and Blues publications are already coming in. The CD jacket and cover is being designed by well known Blues Foundation graphic artist, Jen Taylor, and is being slated for a mid-summer 2012 release. The CD would not be possible either without the blessings of Willie’s family, who have been very positive and supportive of this project.

It was the night before Valentine’s Day and a Friday the 13th, a perfect time to go hear some live Blues. So I drove down Hiway 129 South from Knoxville to Maryville and stopped off at Brackins Blues Bar, East Tennessee’s home of the Blues. Roger “Hurricane” Wilson and Willie “Big Eyes” Smith were going to be playing, and that sounded too good to let a 20-mile drive keep me from hearing them.

I had seen Roger numerous times in Knoxville and Maryville, playing ferocious guitar in his electric Blues trio. I had only seen Willie once before, playing drums in an All-Star band at the Blues Music Awards in the Orpheum Theatre in Memphis, back in the day when it was still called the W. C. Handy Blues Awards. On this night, Roger was playing acoustic, and Willie was playing harmonica, and a magic night of Blues it was. Now I love raucous, shake-yer-booty electric Blues as much as the next guy, but you seldom get the opportunity to hear the Blues in its purest form, harking back to its earliest days, just two Bluesmen with a guitar and a harmonica, sitting side by side.

As far as I know, Roger and Willie have just started touring together recently, but you would have thought they had been playing together for years. Though separated by a generation, they were united in their love and reverence for classic Blues, and you could see that they were having a good time playing off each other. “Hurricane” is a big, burly guy who fits the role of a fiery electric Blues guitarist, but he sounds even more masterful, more intricate on acoustic. On a few songs, he broke out the slide for a greasy and demonic effect. Willie is slim and spry and was clearly having a ball, sometimes kicking up both heels while cutting loose on a mean harmonica riff. They swapped out singing the songs, with Willie taking the lion’s share.

The audience was really digging the show. A few got up and danced some, but most sat and listened and watched as these two Bluesmen demonstrated their mastery of their instruments while playing the real deal Blues. An extra treat was provided by one of the audience members, who happened to be Wallace Coleman, from Cleveland, Ohio, and a native of Morristown, Tennessee, who was down here visiting relatives. Wallace is a darn good harmonica player in his own right, having played for years in Robert Lockwood, Jr.’s band before forming his own. He is a friend of Willie’s and heard that he was in the area. They chatted during a break, and then Willie invited Wallace up to sing and play a couple tunes.

For lover’s of real Blues, it was a special night to be savored and remembered. Here’s hoping we see “Hurricane” and “Big Eyes” back this way again.