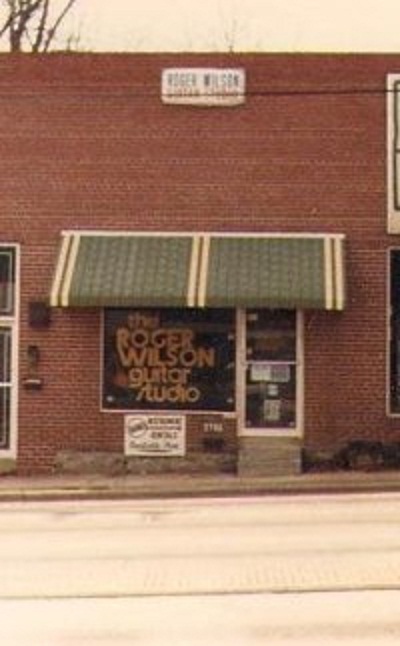 June of 2013 marks the 40th anniversary of the Roger Wilson Guitar Studio of Atlanta, Georgia. My first location was at 220 Pharr Road in the Buckhead neighborhood of North Atlanta, from 1973 to 1980. It was then located at 2796 Piedmont Road from 1980 until 1985. The business operated full-time during that period, but is still in existence today in Kennesaw, GA as an online forum. During the 12 years in Atlanta that the brick and mortar location existed, I had the pleasure of teaching guitar to hundreds of people that passed through the doors at both locations. The story of the studio is an interesting one. In early 1973, I was attending college in my home state of New Jersey, but I wanted to return to Georgia after having attended high school there at Woodward Academy in College Park from 1967 to 1972. I had already been exposed to and was now saturated with the desire to pursue music as a lifetime career. A friend made a few phone calls for me to look for any possible music oriented job opportunities, and contacted a gentleman named Sidney Ayscue, who owned and operated the Buckhead Music Studio in North Atlanta. I spoke with Sidney several times on the phone and I decided to head back to Atlanta and make a go of this potential opportunity. When I arrived back in Atlanta in June of 1973 at age 19, Sidney allowed me to move into a room in the studio by agreeing to try to expand, but realistically to build a guitar teaching business. My only teaching experience was about 6 months at a little music store in Matawan, New Jersey, while my knowledge of the guitar and music was already that of 10 years. Sidney and I named our new operation the Atlantis Music Studio, which placed it in the “A” section of the Yellow Pages. Sidney and I worked together for about a year before Sidney was starting to lose interest in teaching and wanted to change his life’s direction. One day in August of 1974, while sitting at my desk in my small studio, the phone company called inquiring about the phone bill, which was apparently overdue. When I explained to the gentleman on the phone the situation of lately not seeing my partner, Sidney, around for a few days, the writing on the wall was evident that I had to make a quick decision. I was then a year into teaching fulltime, and I was making an OK living teaching guitar lessons. I still needed the phone, but I would have to open a new account, under a new name. The phone company guy stated that the Atlantis Music Studio account was now delinquent and asked me what name I would like to use. In having to make a split second decision, I told the gentleman to open the account under “The Roger Wilson Guitar Studio”. As I said that, the words seem to fall out like a 2 ton boulder. It sounded really weird. Being all of 20 years old, I wondered who in the world would ever take me seriously. The next day, I walked around the corner to the phone company and put down the $50.00 deposit, which seemed like a fortune at the time, on the new phone service. From that day on, the journey began.

While I had been teaching each of my students the traditional approach of reading music, it was apparent to me that it was a tedious method. Some related to it OK, and some just weren’t looking to be that serious about it. One day, a kid showed up for his lesson with an electric guitar and a record album. He had no idea of any guitar basics. I don’t recall the album he brought, but it may have been Led Zeppelin IV. I do remember it was a song, probably Black Dog, that he wanted to learn.

After explaining to him that he really needed to learn to learn some basic technique before taking on any advanced material. He said, “Yea, I know… but just show me something on this album I can have fun with”. While I was tuning up to the song, I guess I played one of the song’s signature licks. He said excitedly, “Show me that, show me that! After trying to eek out the part I showed him for about the last 20 minutes, he promised to go home and practice it until he had it perfected for the next lesson. When he left, I remember that was grinning from ear to ear. I sat there stunned wondering what had just happened. After that, my phone never stopped ringing, and kids were carpooling 4 at a time in their parents’ cars to come take guitar lessons from “the guy that will teach you what you want to learn… and make it fun”. I always loved it when they left happy, having fun, and of course, telling their friends.Thanks for 40 years!

Roger is now accepting students in the Atlanta for the 2013 Fall season area on Wednesdays at Ponier Music in Marietta, GA.