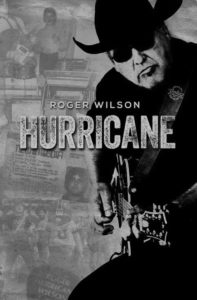 Through these conversations I knew him as a touring musician and not much else at the time. Not too long down the road we had the opportunity to meet face to face at the International Blues Challenge. Roger would become a regular judge for the event while I was working as a venue coordinator. I became more aware of his music as he gave me a few of his CDs, including work that he had recorded with high school students at festivals as part of the Blues in the Schools program. He even made a trip to Portland, attending a Cascade Blues Association membership meeting and a jam at Duff’s Garage afterwards. So when he released his autobiography I was interested in finding out more about his musical life. But what surprised me was just how much more to his life there was beyond music.

Hurricane is easy to read, with short chapters reflecting on various times and occurrences in his life. It starts off with his family and his new-found interest in music. You follow him through his early studies with guitar teachers and his time in school bands in both New Jersey and Georgia. The friendships he developed, the bands he formed, and working at the Garden State Arts Center right out of high school witnessing performers like Bob Hope, Duke Ellington, Andy Williams, as well as pop acts of the day like David Cassidy and The Carpenters. It covers his dealings with the choice of becoming sober, and another interest that took on a major role in his life, broadcasting.

A lengthy career with various radio outlets as a programmer, DJ, air traffic control and various other positions, sometimes with multiple stations all at the same time spending long hours while trying to raise his own family, plus teaching  and performing music along with the hardships of traveling between gigs and assignments. And he covers the number of  years that he spent at CNN and the places it took him to, including a press conference at the Bill Clinton White House.

It is not only Roger’s life that we witness. It is the people he encounters along the way and the friendships he makes. We see the likes of Bruce Springsteen in his early days, the breaking out of The Allman Brothers and the influence of Duane Allman upon Roger’s own playing, the impact that Roy Buchanan had upon him, and encounters with acts like Doc Watson, The Indigo Girls, and Stevie Ray Vaughan. Close friendships that developed between himself and TV commentator Andy Rooney, the long-time closeness with the legendary guitarist Les Paul, and his association touring and recording with blues man Willie “Big Eyes” Smith.

The book taught me more about my friend and made me more impressed with his accomplishments that are far from being finished. It is a very deep dive into his life and more than just an interesting read. It is the story of a man who has lived a full life seeking his dreams and living on his own terms.