This month of August mark 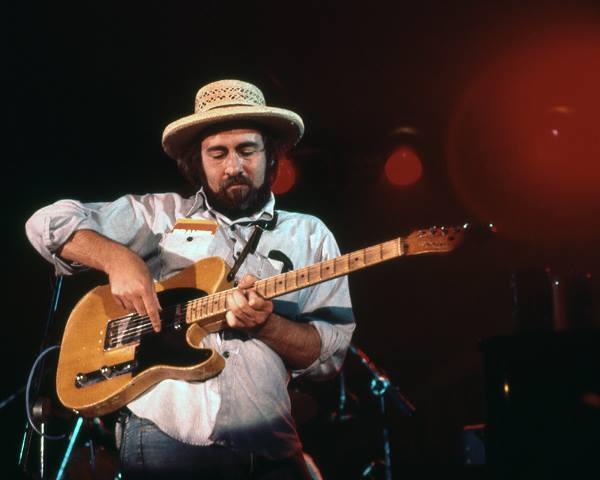 s the second anniversary of the death of guitarist Roy Buchanan. Roy was known as “the guitarist’s guitarist”.
Although he wasn’t a commercial entity, he was none the less a master blues/rock guitarist. He began playing in the 50’s with the Dale Hawkins Band, and was first heard on Hawkins’ hit “My Babe”. He then worked with a group of musicians that later became “The Band”.
Throughout the 70’s and early 80’s, he had a string of solo albums that didn’t sell well by commercial standards. Quite a large number did sell well to a devoted cult following, with a great percentage of it being musicians.
Roy committed suicide by hanging himself in a Virginia jail cell on August 14, 1988. He had been arrested for drunk driving after leaving home in the midst of a domestic dispute, according to wire services quoting authorities. It was a great loss and shock to many that respected Roy and admired his music.
I first met Roy Buchanan in 1975 while doing an interview for Atlanta’s famed underground newspaper, “The Great Speckled Bird”, which was then in the epilogue of its existence. Having listened to Roy’s music since 1972, in addition to having seen him perform a couple of times, I immediately jumped at the opportunity to talk to him. Nervously, I walked into the dressing room at Alex Cooley’s Electric Ballroom in introduced myself to Roy. After explaining to him why I was there, he very calmly and politely told me he’d be glad to talk to me, and then said, “What are you drinking”? All of my uneasiness immediately disappeared, and he and I proceeded to develop a lengthy and close friendship from that moment on.

After the second show of that first night, I drove Roy and his manager, Jay Reich, back to their hotel. We sat up for a while, to the crack of dawn to be exact, talking about music and life in general. For the next two nights, I drove Roy and Jay to and from the gig, and watched in amazement while Roy blew the roof off for four more shows. To me, it was a three day long guitar lesson.
Back at the hotel, Roy told me of some of his primary influences, and showed me some of his guitar techniques. One of his signature songs was an instrumental version of Don Gibson’s “Sweet Dreams”, but he said his favorite version was by Faron Young. He also told me about a guitarist named Jimmy Bryant who was playing psychedelic music in the 50’s, and about the writings of Bukowski. Roy revealed being a spiritual man, and that he believed in God, and that he loved his family very much. One of the first things I had ever heard previously about Roy was that he did not want to go on the road very often in order to spend time with his family. At that time, I believe he had six children. Roy was very full of life, and he had a lot to live for, but even then I began to sense a somewhat troubled and restless side of him. He said he felt like he didn’t relate to the world in general, and said that he probably should live on his own planet. After having received an offer to join the Rolling Stones, he declined by saying he didn’t want to be the second casualty, referring to the death of Brian Jones in the sixties. He always had a type of sad, sensitive look in his eyes that I almost can’t describe, but it gave me the impression that he was searching for something, and that he was having a difficult time finding it.
During future appearances to Atlanta, which once again included the Electric Ballroom, the now legendary Great Southeast Music Hall, and the Omni, I would regularly drop everything to go hang out with Roy. He continued to open up to me about his experiences in the 50’s and 60’s, about musical ideas, and his opinions on various subjects. Roy had a simple formula for music…he played songs he liked… the way he liked. He played for himself, but he was always visibly pleased when he knew that he had made someone happy. He had a knack for focusing on one person at a time in an audience, whether it is a few hundred, or a

few thousand. He did it to me many times. When I showed up too late at the Omni to catch Roy’s show with the Jefferson Starship, but not too late to ride with him to his hotel, he said there were several individuals in the crowd that night who caught his attention, and he played to each one as well as the whole crowd. It’s no doubt those people knew who they were. That was the same night he let me play his famous blond Fender Telecaster with the huge frets.
One highlight of my career would have to be the time that Roy was scheduled to perform at the Great Southeast Music Hall, then located in the far corner of what is now Lindbergh Plaza. During previous appearances in Atlanta, I had gotten to know Roy’s drummer, Byrd Foster. When I reached Byrd at the hotel, he said the band was going on that night, despite the fact that Roy was snowbound back in Virginia. Byrd then asked me if I had my guitar available. At that time, I was teaching guitar lessons for a living, and all I had in life then was my guitar. I knew immediately if word of this got out, there would be guitar players parachuting into the parking lot by the hundreds.
Upon my arrival at the music hall, I found that an amp had been rented for me. We proceeded to go through a 15 minute crash rehearsal in the dressing room. Remembering that Roy liked the Beatles’ “Slow Down”, and Neil Young’s “Down By The River”, through those plus some other familiar rock & roll and blues numbers. I took a deep breath, and then went out and did the show with Roy’s band. Of course, one does not go onstage with Roy Buchanan’s and band and try to be Roy Buchanan. That is not what I tried to do. I tried to do what Roy would have done… HAVE FUN! The audience was well aware that Roy wasn’t there. Some folks had already gotten their money back… but the ones that were there had apparently decided to brave the storm with me. His band was exceptional, the crowd was great, and that night we received two encores. I will never forget that as long as I live.

When Roy arrived in Atlanta the next night, the band had filled him in on the night before. Roy then told me, “Roger, the first time I met you, I told you I loved you, man… and I still do… and I appreciate what you did… you really helped me out.” I will never forget that either.

Roy and I talked long distance a couple of times after that. He said he thought about me frequently, and that he looked forward to coming back to Atlanta someday. After not having heard from him for a number of years, I was opening a show for Billy Price and the Keystone Rhythm Band of Pittsburgh. Billy had been Roy’s singer on his live album. Billy told me of Roy’s first album in years on Alligator Records, and that Roy was really inspired and doing great. I went out immediately the next day and bought the album. I was out of town during Roy’s final appearance at the Center Stage Theatre in Atlanta, so I missed the opportunity to see and talk to him.
As the summer begins its final home stretch into fall, this time of year has always been one of reflection for me. When I first learned of Roy’s death, it caused me to reflect greatly. As each year passes, I remember Roy and what I gained by knowing him. As fluent as he was on his instrument, he was still in awe of the guitar. He was equally in awe of life, and I was equally in awe of him.
I have come to believe during my 37 years of life, that there is a reason for everything in this world. I have been faced with many situations that have required faith minus understanding. Whenever I think of Roy Buchanan, it appears that I am again facing one of those situations.

Taking It To The Schools