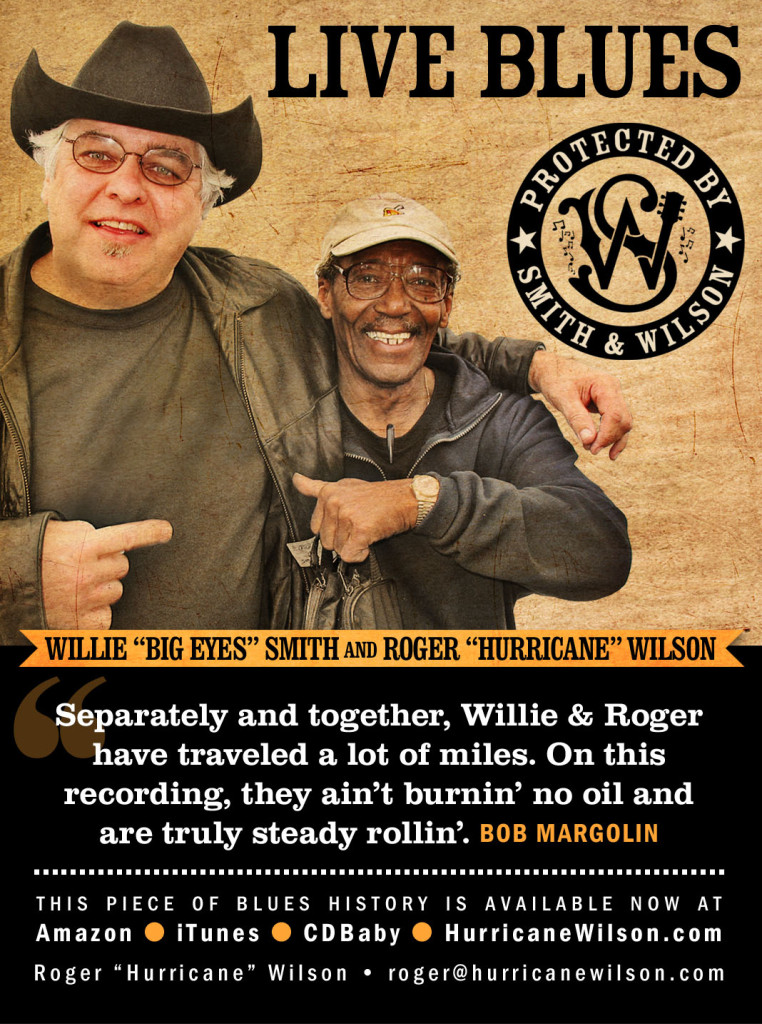 From Wasser-Prawda. Is there anything better than predictable surprises? Clearly, if a surprise turned out to be pleasant.

Anyone who knows me knows that I am constantly in search of good blues music, which is not necessarily readily available. Mostly because Europe has found no record label or released the CDs in self-publishing and are very difficult to obtain. Just such a gem is the purely acoustic live CD of Willie Smith and Roger Wilson1in 2012. The show was recorded on 11/09/2009 at the sold out Whitaker Center in Harrisburg, PA.

Willie “Big Eyes” Smith is known to us all as the legendary bluesman who played harmonica and drums, sang and worked for many years at the side of Muddy Waters. His last album he played shortly before his death (16/09/2011) with the also deceased Pinetop Perkins meantime a. For this album, he received a Grammy for Best Traditional Blues Album (Joined at the Hip, 2010).

Roger “Hurricane” Wilson is a physically impressive blues man who is constantly on the road for 40 years. He initiated the project and released the CD on his own label. Here, two have come together for a concert, this is not one of them had expected (surprise!).

Four of the thirteen songs contributed Roger Wilson, the others are mostly good old friends: The opener, Sonny Boy Williamson’s song, “Eyesight to the Blind” is an absolutely reduced Blues – harmonica, guitar, two voices. Slim Harpo’s long-running “Scratch my Back” starts with a very tender accompanied by the guitar three minutes Harpsolo, Muddy Waters is represented with “Long Distance Call” and “Got my Mojo Workin ‘,” Willie Dixon with the indestructible “Hoochie Coochie Man”.

Here are two great blues musicians at work, both veterans who have made outstanding contributions to the blues for decades. You pick up a guitar, a harmonica, their voices and two bar stools (I assume at least) and play in front of an enthusiastic audience a great concert an what is necessary and really good with everything. You can hear that in the reactions of the audience and the musicians.

Unfortunately, it will not be such a concert – but the CD is both a document and a recording that belongs in every well-maintained Blue collection. They like to bring again and again for a quiet hour out – these blues is timeless. As the title says, Blues Protected By Smith & Wilson.

I have seen that the CD is available for download in Germany, and I myself have put me in touch with Roger Wilson and he sent me the CD – there’s a way (Roger is a great guy and a great medium Paypal!). THICK KAUFTIPP!

Check Out The Song, Home Sweet Home In My RV