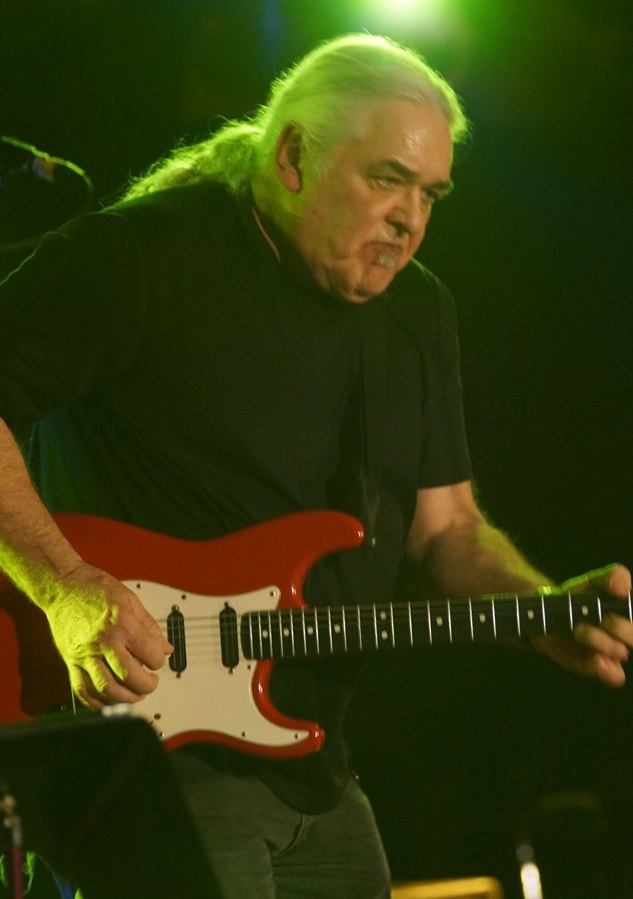 Guitarist and songwriter, Roger “Hurricane” Wilson, was born on July 27, 1953 in Newark, New Jersey. When he was a year old, his parents moved to a little town on the Jersey shore, in search of a life other than in the city. Life there was typical for a young family in the early 50’s. There are memories of Elvis singing “Love Me Tender”, and Tennessee Ernie Ford singing “Sixteen Tons” ringing from radios and turntables everywhere-melodies that would haunt him forever. In September of 1960, the peaceful existence was turned upside down when the town was virtually destroyed by the still legendary hurricane “Donna”. The town was never the same from that day on.

One day, Roger discovered that one of his friends was taking guitar lessons. Immediately, as kids typically do, he wanted to do the same. His mother took him to his first lesson on January 7, 1963, at the age of 9, and rented a plastic beginner guitar. As his teacher taught him individual notes week after week, Roger was still inclined to find cool sounds coming out when the strings were struck together as chords. This music thing sure appeared to come quite easily, and naturally. Although the teacher would have preferred Roger give priority to his assigned lessons, they tended to take a back seat. The teacher, a mild-mannered white gentleman with horned rimmed glasses and winged tipped shoes, just did not understand. Later on, Roger started taking trumpet lessons in order to join the elementary school marching band, and tolerated them while in reality, all he wanted to do was play the drums. He later saved up to buy his own drum paraphernalia, and started wood shedding that too. On one special parade day in Red Bank, NJ, while in the eighth grade, the school band drummers didn’t show up. The band director handed a snare drum to Roger, and said “this is your shot”! He received a special award on the last day of school in front of the whole student body for saving the day.

The next year, in February of 1964, Roger was in front of the TV on Sunday night when the Beatles made their American debut on the Ed Sullivan Show. Being an only child, he was unaware of the curve ball being thrown at American kids everywhere. All he noticed, other than the screaming girls, was that there were THREE guitars on the stage, and one was being played BACKWARDS! The next day, all of the kids were acting crazy! They were combing their hair down in front, and some had these wild looking pointed boots; and they were all playing air guitar! Roger had already been playing guitar, and making his teacher mad for well over a year. Next to the Kennedy assassination during the previous November, this was pretty traumatic. Later, Roger got his first electric guitar, and the next couple of years were spent playing, or attempting to play music in various garage bands by The Kinks, The Beatles, The Yardbirds, The Animals, Paul Revere & The Raiders, while of course trying to match the lead licks of “Louie, Louie” and “Hang On Sloopy”. Ironically, most of that music was remakes of old blues tunes.

In 1967, upon graduating from grammar school, the little Jersey shore town didn’t have their own high school. The surrounding townships were bussing kids wherever they could fit them in. Roger’s parents thought it best to place him in a more positive environment. They sent him to a private prep school in Atlanta. The “bubble-gum” music era was in full swing, and after being subjected to “Monkees” TV shows for the last year or two, Roger found it quite nauseating. While there, the 14 year old became addicted and taken in by the music of Otis Redding, Wilson Pickett, Aretha Franklin, Eddie Floyd, and Booker T. & The MG’s. The Memphis sound and feel started unknowingly planting its obsession. Roger, of course was immediately drafted by the school band to play trumpet, but the band director would occasionally let him replace undependable drummers. 1968 showed up when Hendrix, The Doors, Quicksilver Messenger Service, Janis Joplin, and “psychedelic” music, referred to then as “underground” music, raised its sleeping head. B.B. King’s “The Thrill is Gone” hit the airwaves, and according to Roger, “there was something going on”. The single lead, vibrato notes pioneered by B.B. were essentially drawing him in. He bore down on the guitar, and learned as much as he could about the music, and the artists that made it. When meeting B.B. King in later years, he explained to the blues master what had happened.

1970 had Roger making weekly pilgrimages to Atlanta’s Piedmont Park to hear bands, mainly The Allman Brothers Band. Not much was remembered in detail until the night of June 16, 1971, when The Brothers played their first sold out show in Atlanta’s Municipal Auditorium. The 17 year old stood 6 feet away from Duane Allman, and was completely swept off of his feet. After years of guitar lessons, a knee-high stack of guitar books and sheet music, the boy was never the same! The slide guitar playing that night in itself was another force to be reckoned with. In the days that followed, he was haunted by what he had seen, and heard. Roger began wearing out Allman Brothers Band albums trying to capture that sound. His next reaction was, “the hell with everything else”! All he wanted to do now was play as well as he could.

During his senior year in high school, he was bestowed the title of drum major in the high school marching band. On October 29, 1971, Roger was conducting the school band through the national anthem on the field at a football game. After the game, he heard the radio report of Duane Allman’s death in a motorcycle accident in Macon – another traumatic moment in addition to JFK’s assassination, The Beatles, and the death of his grandfather in ’67. He immediately started bearing down on the music even harder. When the Duane Allman “Anthology” came out in late 1972, the enclosed literature spoke of how Duane’s eyes used to light up at the mention of Robert Johnson. Who was that? Thus began the search for the origins of the music that made all of this happen. Robert Johnson, Willie McTell, and Elmore James albums were only the scratching of the surface for this musically consumed 19 year old. 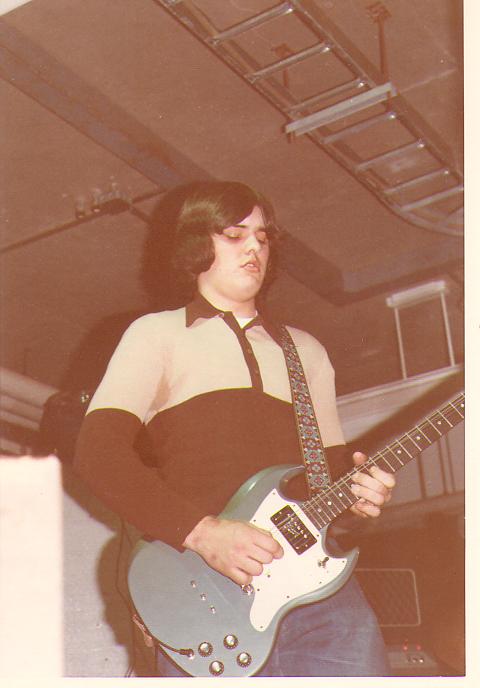 After a year back in New Jersey following high school, Roger headed back to Georgia in 1973, determined to play guitar. He got a job teaching in a private studio, and eventually took it over as his own business. Success came about by teaching people what THEY wanted to learn. He named his business “The Roger Wilson Guitar Studio”, and he soon had an extensive waiting list of students wanting to learn how to have fun with the instrument, as opposed to suffering with it. With the business up and running, and fed up with playing with mediocre bands, he started the “Roger Wilson Band” in 1978. If the name worked for the studio, why not a band? It did! He went from the garage to opening shows for people like Albert Collins, 38 Special, and various Skynyrd spin-off bands. Roger says he mostly enjoyed working with a very young Johnny van Zant, now lead singer for Lynyrd Skynyrd, on numerous occasions. A jam with Stevie Ray Vaughn at a now defunct club in 1980, along with the two and a half hour jam with Albert Collins in 1979 at Atlanta’s Agora Ballroom are 2 of Roger’s highlighted memories. These along with a close friendship formed with guitarist Roy Buchanan make for book material alone. The RWB lasted until 1983. Still not quite at home with the other band members’ visions, he made some personal changes in 1983, and formed a 3 piece unit called “Roger Wilson & The Low Overhead Band.” This act was simple, cheap, and easy to move. With this act up and running, Roger did shows with Dickey Betts, Little Feat, Three Dog Night, Leon Russell & Edgar Winter, Marshall Tucker Band, Roomful of Blues, and was starting to regain momentum. While on a northeast tour in 1993, it came to the attention of Roger’s soon to be producer that people were screwing up his name. After a disc jockey virtually butchered it during a North Carolina radio interview, with the name in BOLD LETTERS in front of him that was it! Hottrax record producer, Aleck Janoulis, said you need a “moniker”, something for people to remember you by. He also noted that Roger had a habit of going into a town, virtually making a mess with the music, and then leaving early in the morning to go back to his TV news network production job. This along with the childhood hurricane experience led to the stage name, Roger “Hurricane” Wilson. It became official at the next show in Washington, DC. It was determined that you could forget his name, but no one would forget “Hurricane”. Since then, there have been endless shows and festivals with B.B. King, Buddy Guy, Little Milton, John Mayall, Savoy Brown,  and Dickey Betts just to name a few.

A major highlight was in New York City while attending the regular Monday night gig of guitar and recording pioneer, Les Paul at the Iridium Jazz Club at 51st and Broadway. After the first show, Roger introduced himself to and spoke briefly with Les’ son, Rusty Paul, and was invited to get onstage for a few tunes with the master in September of 2003. Since then, no visit to New York City was ever complete without stopping by on Monday night to hang out and jam with Les Paul. Les is quoted as saying about Roger, “This guy plays some great blues!”

The first CD, “Hurricane Blues”, released in 1994 on Hottrax Records, received, and still is after 25 years, receiving airplay on well over 100 stations across the U.S and globally. The second Hottrax project, “Live From The Eye Of The Storm”, was released in 1996, and is enjoying  the same, if not better response than “Hurricane Blues”. In addition to  having played between 250 and 300 nights a year for many years, Roger still produces and hosts his own syndicated radio show and podcast. Virtual online performances are now the norm for adapting to the current conditions beginning in 2020.

In 1997, Roger decided that it was time to step to the next level. At the advice of his distributor, he decided to form his own record company, Bluestorm Records. This venture gave rise to the third CD, “The Business of The Blues”. The title track was written about the daily challenges of daily life on the road. Also featured on this CD are 5 acoustic tunes, which started to establish Roger’s acoustic work, which has become a separate entity, and occasional combination with his electric sound. The fourth CD is called “Live At The Stanhope House”, recorded at that legendary blues club in New Jersey. A fifth effort, all solo acoustic, “Pastime” has received critical acclaim, and the sixth CD called “The Ohio Connection” was released in late April, 2004. Since then, there have been more than 25 CD’s and download singles released. Be sure to visit both www.HurricaneWIlson.com and www.BluestormRecords.com